I want to Be-Leaf

A Bevy of Christmas Ideas

Thorn in My Side

Hanging Up My Heart

Twinsie at the Beach

He Said She Said

Dawn in the Misty Garden

It's All About Him

Sunset After The Storm

The Last Stitch of Summer

Of Sand and Surf

Tied Up In Knots

We Will Never Be Royal

To Zig or To Zag?

Are You Back From Miami?

What to Wear in my Blue Bel Air

Crystals On Me Eye-Wear

Treasures From the Sand

Sand on the Snow

You are a Star

A Bevy of Bracelets

Fit for a Queen

Wreathed in A Smile

Rhine Between the Lines

Shake it up for Fall

Celebrating the Jewels of India

Just Around the Curve

Stepping across the Bay

And thats a Wrap

A Coiling We will Go

Something from the East

Blame it on Rosemary

Heart of the South West

Thinking of the Beach

Day of the Dead

Rondelles and a Donut

The Bright Side of Winter

Along Came a Spider

Spidey on a Pumpkin

The Origin of Life

Key to the Future

In the Neck of Time

A Long Way to Spring

Who Let the Dogs Out?

Bling in the New Year

Partridge in a Pear Tree

The Spirit of Giving

Just for You Sir

Down on the Farm

The Last to Fall

Create for the Cure

Three Coins in a Fountain

Easiest Ring in the World

Are the Stars Out Tonight

The Zen of Spring - Growth

The Zen of Spring - Water

Something Fishy This Way Comes

Key to my Heart II

All the Right Places

Splendor in the Pearl

It's all about the clasp

Romance in the Caribbean

Key to My Heart

A Bite of Sky

Dancing Under the Night Sky

A Splash of Seafoam

Glam on a Dime - December Birthstone

Contact us! Confused, Lost? Just getting started? Got a question? Ask us — We have a real person that answers Mon thru Fri. info@beadfx.com

InspirationFX
Get your creative juices flowing
Need some help with some of the techniques? Check our tips page.

Crystal Rocks! That may sound like I'm stating the obvious - but in this case - that is the name of these fabulous Swarovski pendants. They are vaguely reminiscent of arrowheads - with their irregular faceted edgesand partial matte finish.

I never noticed that Swarovski's "Black Diamond" has a greenish tinge to it - until Marg pointed out that this fall's new color (coming soon) - Crystal Silver Night - is more of a true black diamond colour.

Now that I have noticed it - it's so obvious, how did I miss it?

Anyway - this earthy and ethereal piece plays to that - the Black Diamond ties into the Tree Agate beads. The subtlety of the Silver Shadow and the Golden Shadow take it beyond a simple crystal necklace and add complexity.

And - because I had extra beads, I make a bracelet and earrings to match!

Using pre-made bails to hang the pendants - instead of hand wiring each one - made the project much faster and easier, but also increases the cost.

As an alternate, this would be stunning done all in black.

The donuts - in theory, I was buying all Crystal Silver Shadow, but some of the Golden Shadow got mixed in. I found I rather like the effect, so I left them as a mix.

The bracelet is two strands. I started in the middle, alternating 6 mm rounds and donuts. I switched to 4 mm rounds, 1 on one side, 2 on the other, and then brought both strands together with a donut. I then separated the strands, and did 1 4 mm round on one side, and 2 on the other, and joined again with a donut. I did this to the end, alternating the side that got the 2 vs the 1 bead.

The earrings use a bail to suspend the donut, and a short piece of random wire to make a link with 3 x 4 mm rounds on it.

email to a friend 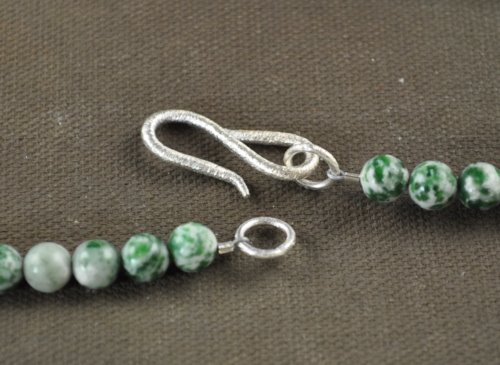 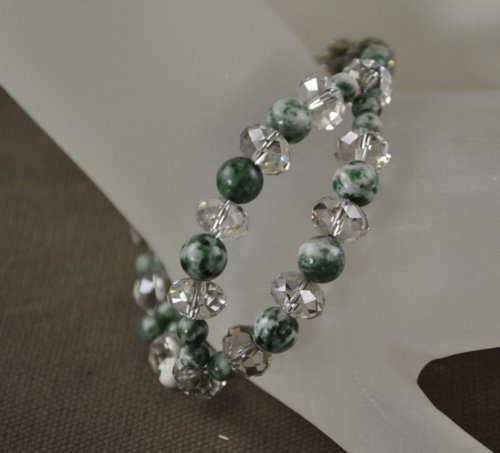 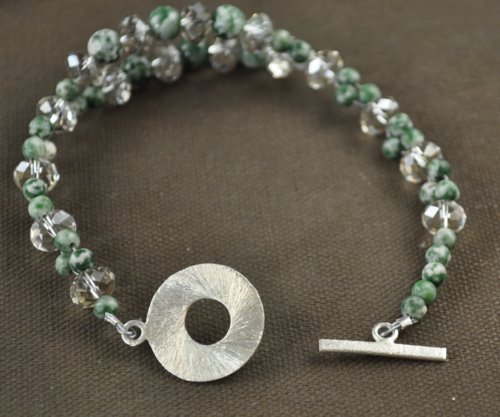 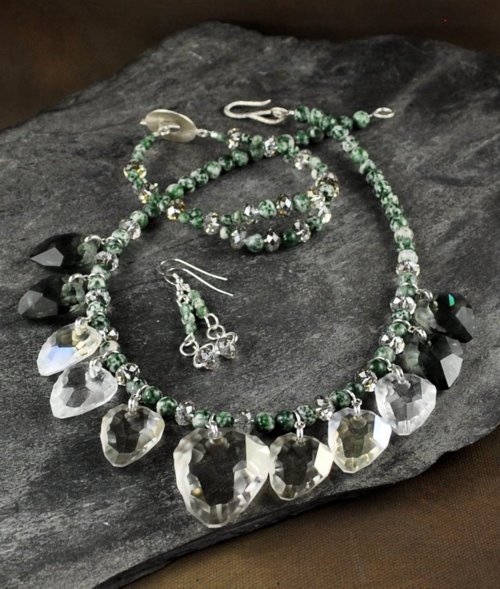