I’ve written about fold forming on this blog in the past and noted several good online tutorials found on Charles Lewton-Brain’s site, at ganoksin.com and on Rio Grande’s You Tube channel.
I’ve been fold forming metal for many years and I just love the annealing, quenching and banging rhythm I find in the midst of this work. Last week, I decided to fold form a series of charms for sale at upcoming shows.
So I took a sheet of 6″ x 6″ copper sheet I bought at Beadfx and divided it into 24 1″ x 1.5″ pieces. Then I folded each one in half lengthwise. Next, I drew a shape along the piece in one of three shapes: either narrow at both ends, narrow at one end or a heart shape. 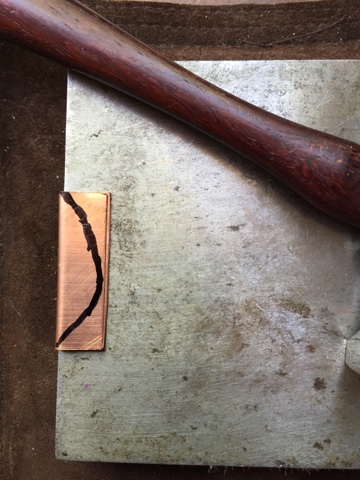 Then I forged some of them along the table, or fold edge, and others I forged along the open edge. Then to change things up a bit I tried something I learned from Mary Hettmansperger – I fluxed some of them with spray flux and that kept the firescale at bay and showcased the gorgeous reds and oranges that come out to play along the surface of copper sheet when it’s quickly heated then quenched. 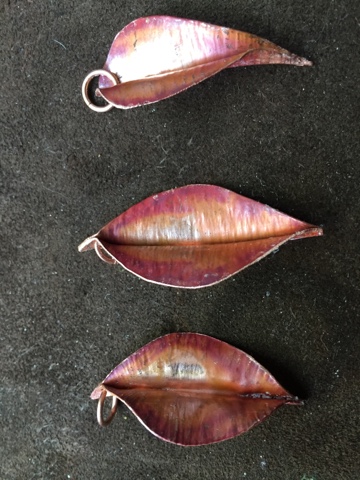 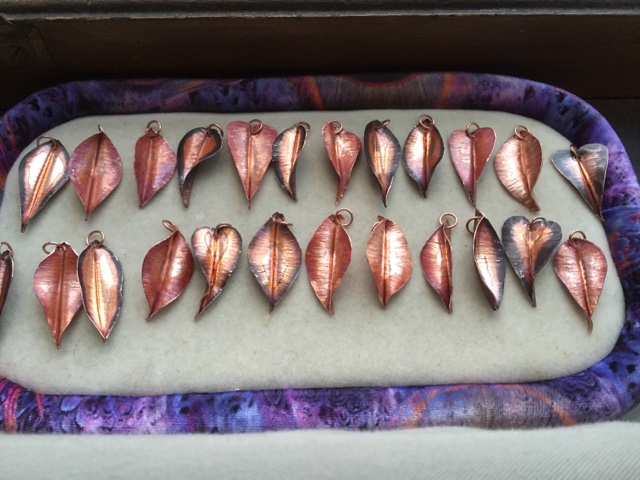 Here’s a group photo. The leaves that weren’t fluxed are distinguishable by their dark edges, which is firescale. If you want your pieces to be bright copper, then pickle them before sealing.
It took me quite a few hours of work to create these beauties but they were well-worth the effort, IMHO.

Cindy teaches jewellery techniques and design classes at Beadfx. Her original pieces have appeared in Wirework and Step by Step Wire Jewelry magazines.
View all posts by Cindy Goldrick →

About Us and our Store